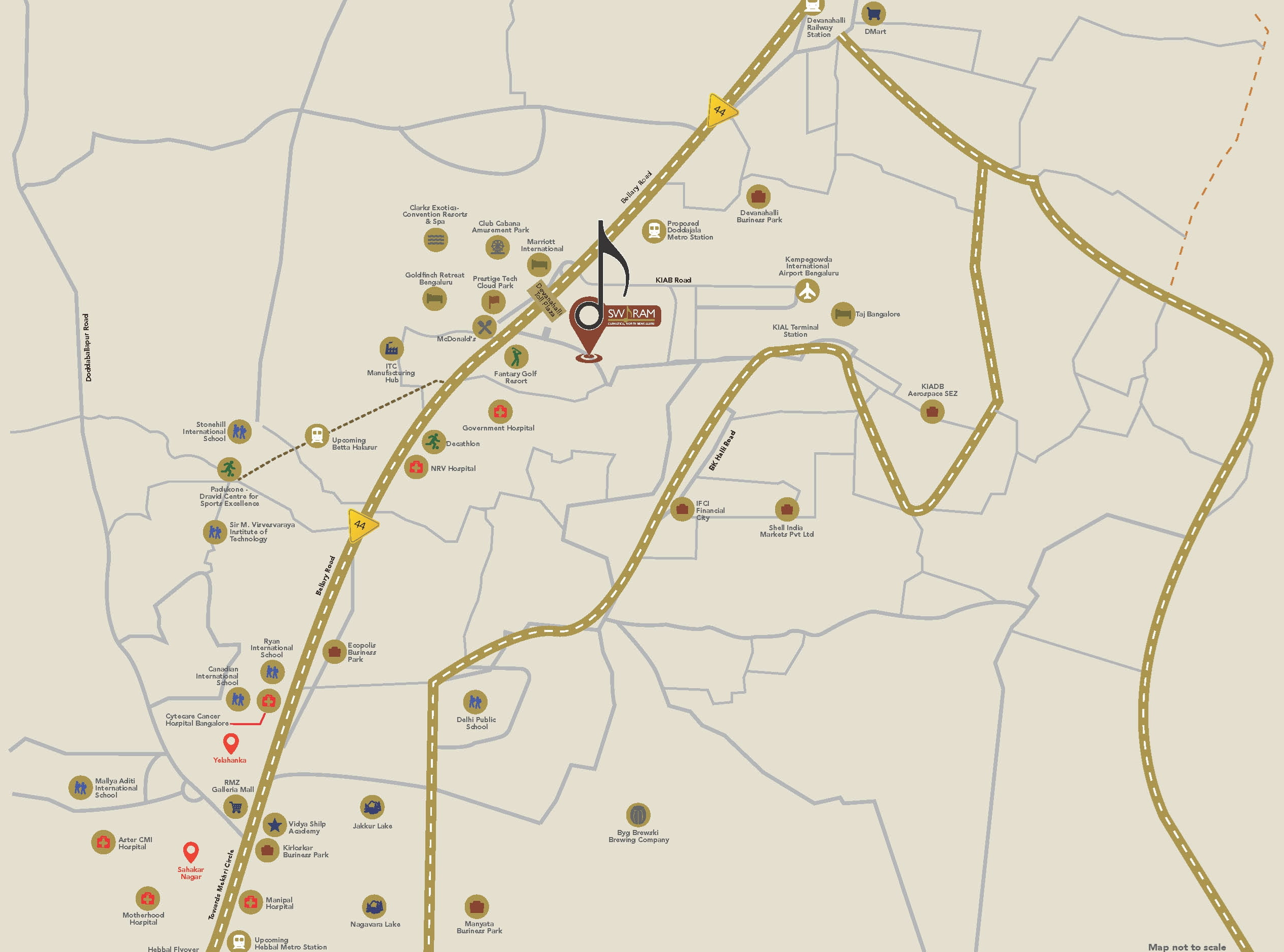 Tata Carnatica is a luxury mixed-use development launched by Tata Housing in the scenic locales of Devanahalli in North Bangalore. This project will cover a vast expanse of 150 acres of land, developed with the utmost care. The elite real estate township will contain within itself commercial development options and residential development options.

Tata Swaram, a plotted development, will contain 180 plots of varying configurations, between 108 to 216 sq m. Meticulously planned, the plotted development will feature properties that have been developed with the most modern technology and techniques. Tata Tata Raaga will feature sumptuous one, two, and three-bedroom apartment units nestled within aesthetically designed surroundings.

Tata Carnatica is located in the prime and upcoming real estate hotspot of Devanahalli in the north zone of Bangalore. This locality is fast developing into one of the city’s most sought- after real estate destinations. This elegant township is ideally located in this neighborhood, with easy connectivity and accessibility from the city.

The growth and development of Devanahalli were initially activated by the establishment of the Kempegowda International Airport in the locality. The airport project was followed closely by the development of several prominent tech parks in the area. The neighborhood is today teeming with workspaces, making North Bangalore one of the major employment hubs of the city.

The locality is ripe with job opportunities with several tech parks such as the TCS SEZ and Aero SEZ here. The under-development BIAL IT Investment Region and proposed Science City and Finance City will further boost job opportunities around Devanahalli. Tata Carnatica is located in the heart of this vibrant employment zone, close to several major tech parks.

Tata Housing has a reputation for locating its real estate development projects in the most upcoming and rapidly developing neighborhoods. Devanahalli, with its superior physical and constantly developing social infrastructure, is one such sought-after locality of the city. There is excellent connectivity to the city via the six-lane Bellary Road, and several infrastructure works are currently in progress.

Spread across a vast land expanse of 140 acres, Tata Carnatica is a mixed-use project developed with the utmost care. This development will have varied residential options, including Tata Swaram, a plotted development, and Tata Raaga, a luxury apartment complex. Comprising 100 acres, the apartment enclave will cover 85 acres, with 11.2 acres designated for the plotted development.

The premium plotted development will consist of 180 well-developed plots of varying configurations ranging from 108 to 216 sq m. Well-planned, these plots will be meticulously developed with the latest construction techniques employed and the usage of high-quality raw materials. The elite apartment enclave will feature luxurious and spacious one, two, and three-bedroom apartment units set in aesthetic surroundings.

The growth of Devanahalli was triggered primarily by the establishment of the international airport in the locality. Tata Carnatica is located in this vibrant real estate destination and is close to several prominent employment hubs. North Bangalore is today teeming with workspaces and is slated to be a significant IT zone of the city.

With tech parks such as the Aero SEZ and TCS SEZ located here, the area is ripe with job opportunities. There are also plans for the BIAL IT Investment Region, a Science City, and a Finance City in the locality. This places Tata Carnatica at the heart of one of the city's most rapidly developing and upcoming employment zones.

There is also excellent connectivity of the locality to the rest of the city via the well- developed and wide Bellary road. Connectivity will further be aided by the development of the new satellite ring road and phase 2 of the metro. The neighborhood also has a robust social infrastructure with several hospitals, educational institutions, and shopping areas within it.

Tata Housing is well known for being ever mindful of its resident’s needs, striving to meet these in every project. This developer is also known for strategically locating its projects in localities that are upcoming and developing rapidly. Tata Carnatica is a project that will be lovingly crafted to be a sophisticated and tranquil mini-city within the city.

1. Where is Tata Carnatica located?
This elite township project is located in Devanahalli in North Bangalore.

3. What are the employment hubs around the township?
Devanahalli Business Park, Aero SEZ, TCS SEZ, Prestige Cloud Tech Park, Manyata Tech Park, and Embassy Knowledge Park are a few of the work hubs in the vicinity of Tata Carnatica.

4. Are there hospitals in the vicinity of Tata Carnatica?
There are several world-class healthcare facilities within easy access from the township, including Columbia Asia Hospital, Baptist Hospital, Aster CMI Hospital, and Leena Multispeciality Hospital.